A Guide to Ankylosing Spondylitis 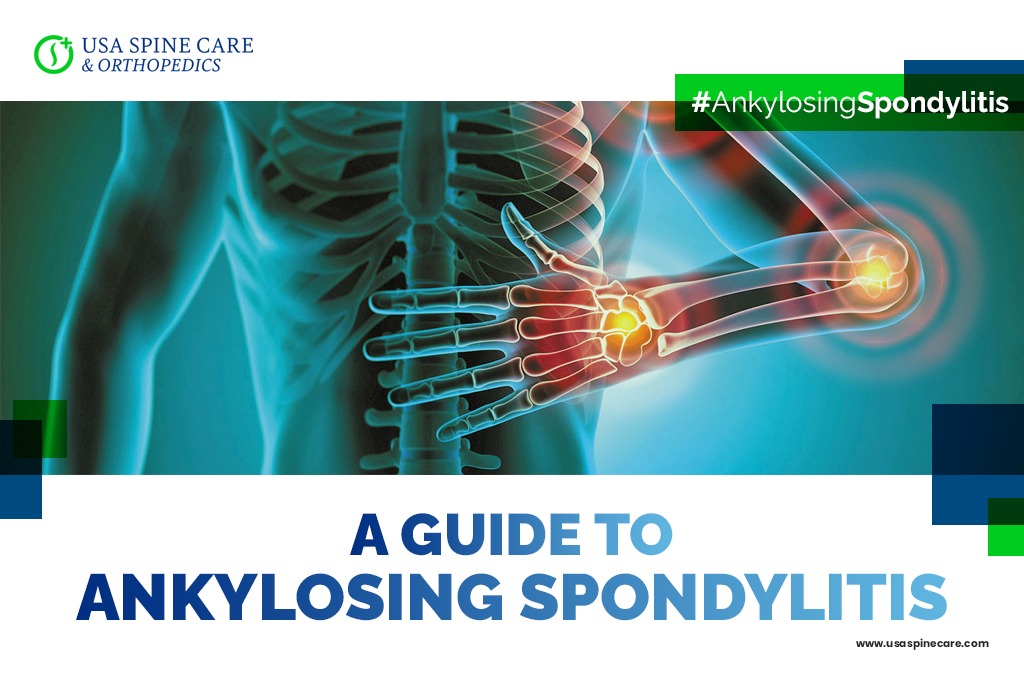 Although there is no known cure and the causes are not fully understood, ankylosing spondylitis can be successfully treated. Whether you have been diagnosed with this condition or you are researching potential causes of back pain, educating yourself as a patient is very important. The USA Spine Care team is providing this overview to help anyone better understand ankylosing spondylitis and effective treatments.

Our dedicated team is standing by to help answer any questions or learn more about therapies. Please feel free to call if you’d like to learn more.

Additionally, ankylosing spondylitis is more common in men and generally develops in late teenage years or early adulthood. This is a disease with gradual onset, where symptoms begin mild and may be mistaken for other conditions and then gradually worsen over time.

Ankylosing spondylitis symptoms include back pain and stiffness

Initial symptoms of ankylosing spondylitis include back pain and stiffness. Some patients also report neck or hip pain and aches. Symptoms can be particularly pronounced in the morning or after periods of inactivity. It is common for patients with ankylosing to experience bouts or flare-ups of symptoms before going into remission.

Properly diagnosing the source of any symptoms is critical for effective treatment. If you are experiencing any aches, pains or stiffness that last longer than a week, see a doctor for diagnosis and treatment.

To diagnose ankylosing spondylitis, doctors will take the typical steps for any examination of back pain as well as some unique measures. In addition to asking about symptoms and activity and reviewing medical history, your doctor may also perform specific movement tests and hands-on examinations. Next, diagnostic testing such as an MRI and blood work will generally be ordered to confirm diagnosis or rule out the presence of other diseases or conditions.

Generally, doctors will recommend patients pursue a course of conservative therapy to relieve pain and inflammation. This includes treatments such as:

Patients with ankylosing spondylitis should also commit to living a healthy lifestyle to help limit inflammation and potentially slow down progression of the disease. This includes:

Is surgery ever required for ankylosing spondylitis?

Spine surgery is generally not indicated for patients with ankylosing spondylitis. However, in some cases of severe spinal instability and/or nerve compression, a fusion or stabilization procedure may be needed to help reduce nerve compression and back pain as well as address the rate of spinal deformity. In cases where ankylosing spondylitis is causing hip problems and severe joint damage, a hip replacement procedure may also become necessary for some patients.

Reach out to the USA Spine Care team today

Ankylosing spondylitis can be a difficult condition to live with, but it can be successfully managed. If you’re seeking to maintain a healthy and active lifestyle after being diagnosed with ankylosing spondylitis, it is important to take a proactive approach to treatment. At USA Spine Care & Orthopedics, our multidisciplinary team has extensive experience in helping patients with a broad range of conditions find the relief they need for a good quality of life. From physical therapy to minimally invasive surgery, we’re committed to state-of-the-art, patient-centered care.

What is the main cause of ankylosing spondylitis?

How painful is ankylosing spondylitis?

Ankylosing spondylitis is a progressive condition, which means that symptoms can begin mild and gradually worsen over time. Patients with ankylosing spondylitis often report a dull ache in the lower back, along with stiffness in the morning. Neck pain and fatigue are also commonly reported.

Is ankylosing spondylitis an autoimmune disease?

How serious is ankylosing spondylitis?

Ankylosing spondylitis can range in severity. In the most severe cases, patients can experience fusion of the vertebrae, permanent deformity and severe pain and mobility problems. Even in serious cases of ankylosing spondylitis, many patients are able to develop successful management plans.


Warning: DOMDocument::loadHTML(): htmlParseEntityRef: no name in Entity, line: 1 in /home/forge/www.usaspinecare.com/wp-content/plugins/jquery-validation-for-gravity-form/includes/functions/jvgf_client_functions.php on line 27