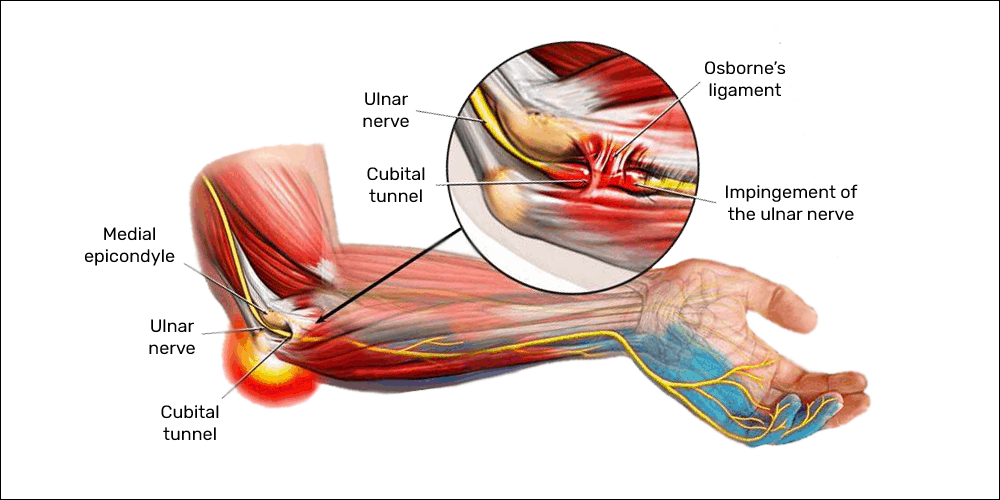 A guide to ulnar nerve entrapment and cubital tunnel syndrome

For people whose work, hobbies and daily activities are affected by cubital tunnel syndrome and ulnar nerve entrapment, there are effective treatments to help manage symptoms. Take a moment to read this brief and informative guide. If you have any questions or want to learn more about treatments, don’t hesitate to reach out to our team.

What causes cubital tunnel syndrome and ulnar nerve entrapment at the elbow?

The elbow is a critical joint that allows for almost all basic arm movements. However, there are also a number of nerves that must pass through this narrow passageway. When this condition begins to develop, a narrow tunnel of tissue, called the cubital tunnel, becomes compressed. This can negatively affect the nerves that pass through it, including the ulnar nerve, which provides sensation and movement to the little finger and part of the ring finger. Entrapment of the ulnar nerve at the cubital tunnel is relatively common because there is little soft tissue to protect it, and bending movements along with pressure on the elbow can cause severe constriction.

Specific causes that can lead to cubital tunnel syndrome developing in patients include:

Commonly reported signs and symptoms of cubital tunnel syndrome include:

Neuropathic symptoms may be similar to other conditions, which is why it is so important to see a qualified physician for diagnosis and treatment if any of the above sensations are persistent.

Untreated nerve compression has the potential to cause permanent nerve damage and can impede symptom relief. The earlier a physician can diagnose cubital tunnel syndrome, the better chance there is of developing an effective treatment plan.

When working with a doctor to diagnose any neuropathic symptoms that are potentially related to cubital tunnel syndrome and ulnar nerve entrapment, there are a number of normal steps patients can expect. The process should generally begin with a discussion of symptoms followed by a review of medical history. Patients should also expect a physical examination to test range of motion and determine if there are specific movements or positions that cause symptoms.

Diagnostic imagery and other tests, such as nerve conductivity studies, may also be ordered to rule out other conditions or confirm ulnar nerve entrapment in the cubital tunnel.

Conservative options are often very effective in helping to manage this condition, but surgery may be recommended if symptoms do not improve despite attempting conservative therapy.

At USA Spine Care, we have a wide range of treatment options for cubital tunnel syndrome at our state-of-the-art facilities. Our compassionate and experienced team has extensive experience in helping people find relief from conditions affecting the elbows and other upper extremities. To learn more, contact us today.