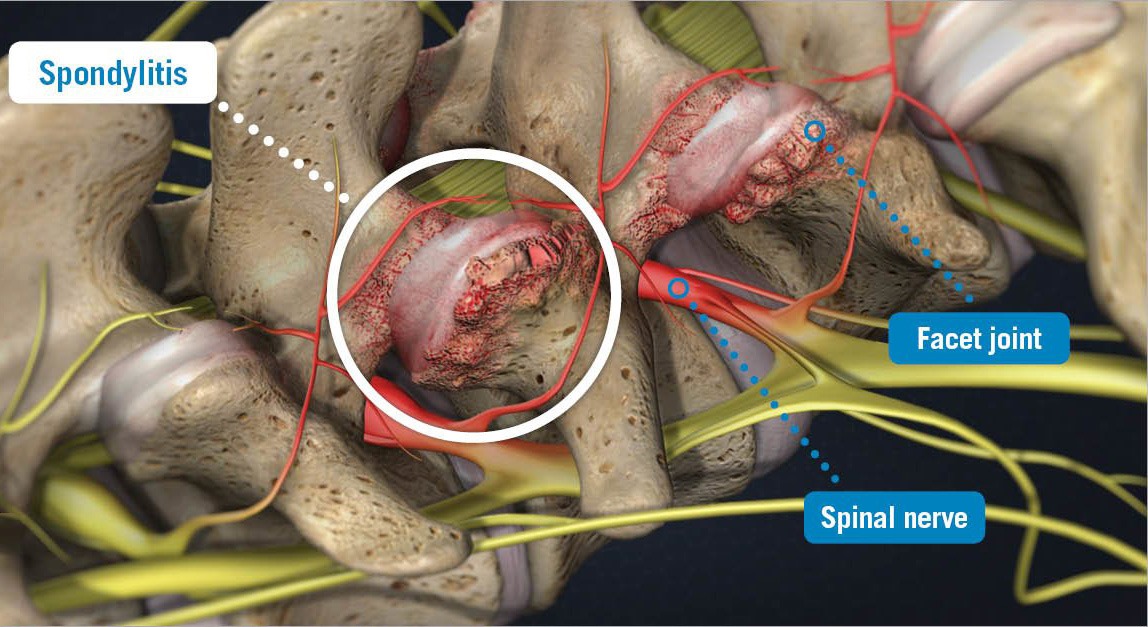 Spondylitis is a condition that causes inflammation in the spine, specifically in the vertebrae and the spinal joints (also known as facet joints). If the condition is severe, the facet joints and vertebrae can swell and move out of alignment in the spine. This can restrict movement, cause stiffness and possibly impact a surrounding nerve.

If you notice the development of these symptoms, and you are not able to find relief after a week of resting, taking anti-inflammatory medication and applying hot/cold compresses, you should schedule an appointment with your doctor. Your physician can review your symptoms and order an MRI to determine if spondylitis is the cause of your pain. Once you are diagnosed, you and your doctor can have a conversation about what type of spondylitis you have, what caused your condition and the treatment options available to you.

Spondylitis is an umbrella term that is often used by physicians to refer to a group of chronic conditions that involve inflammation of the spinal vertebrae or facet joints. This group of micro-conditions includes ankylosing spondylitis, psoriatic arthritis, undifferentiated spondyloarthropathy, juvenile spondyloarthropathy, reactive arthritis and enteropathic arthritis. The most common of these is ankylosing spondylitis, which is a spine condition that describes the stiffness and pain in the spine caused by arthritis in the joints and vertebrae. When left untreated, ankylosing spondylitis can cause limited mobility and debilitating pain, especially if the inflamed joints compress a local nerve root.

Your doctor will likely begin your treatment with conservative pain relief options, such as physical therapy, hot/cold compresses, stretches and pain medication. Many conservative treatment options are available to you, so you and your doctor can work together to find the combination of therapies that best relieves your pain.

If you do not respond to conservative treatment, you may need to consider a surgical option. USA Spine Care does not treat spondylitis. However, our team can provide additional information. Contact us today to learn more.